On the morning of leaving Ljubljana towards Croatia we discovered that the big mean ginger cat we kept seeing around the apartment blocks on the way to town everyday, had a nice clawing session on the seat and left quite a bit of fur all over the tank panniers. Little ginger ******!!

The ride out of Ljubljana was as relaxed as the rest of the city was and the road led us through more beautiful countryside. We entered Croatia from Metlika and headed towards Karlovac (destination Plitvice Lakes), which has the big Karlovačka brewery. When we had stopped for a break Charli said she had spotted what looked like bullet holes on buildings. We did a bit of research at the next opportunity, and it turns out the city was one of the hot spots during the 1991-1995 war between the Croats and Serbs. This was the first real reminder that we were entering a geographical area that was very recently a war zone.

The day kept getting warmer and sunnier and the roads more and more fun with long sweeping bends and beautiful countryside. Charli admitted that once she relaxed she really enjoyed the ride too :)  The gradual change from Slovenia to Croatia was interesting where a lot more small holdings and people farming manually could be seen. We arrived in Rastovaca early afternoon greeted by a band of puppies which tried to take off with one of my sweaty leather gloves. Rastovaca is a beautiful village along a single track road where everyone runs a guest-house on the side for very very reasonable prices (15-20mins walk from Plitvice Lakes). Once we emptied the panniers we went to the shop (10mins drive away) stocked up on lunch and dinner ingredients, prepared a quick lunch (our room had a kitchenette, which was a blessing) and got on with some maintenance. The puppies quickly reappeared and all ran off once I dropped a spanner on the floor, bar one, who decided he was going to help out with the rear brake pad change...

Then he ran off with my rag. Animals seem to be bullying us as of late. That day was the first day on our trip where:

It did not rain.
The sun was out all day.
We busted the shorts out.

In the evening we cooked a nice meal and washed it down with some Croatian vino. 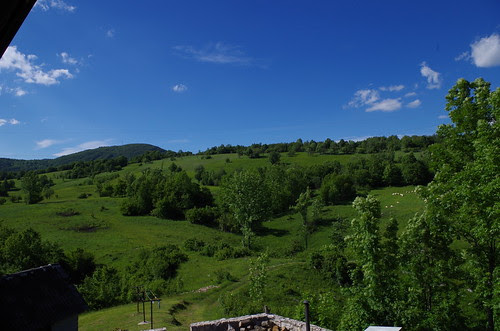 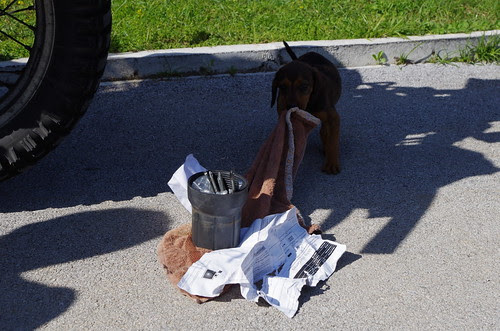 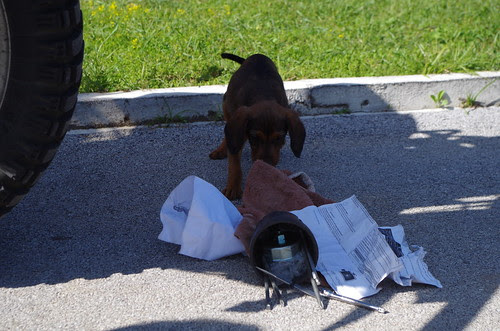 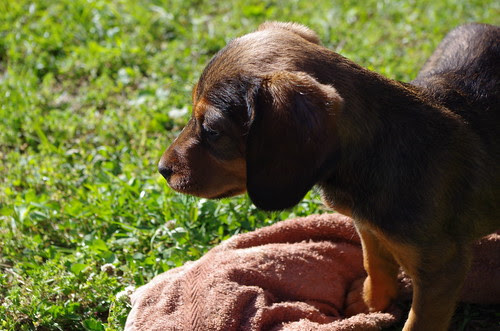 The following day we woke up to cloudy skies and drizzle (the forecast seems to be getting it right) again, we were glad we didn't camp, as we intended to do a bit of a hike around the National Park and the drizzle turned to full on rain. Whilst our stuff stayed dry in our room we sheltered under a hut overlooking the beautiful lakes. I can't remember whether we gave up first or the rain, but we set off walking again. The Plitvice lakes and waterfalls are amazing, hope the pictures below bring you some of the atmosphere: 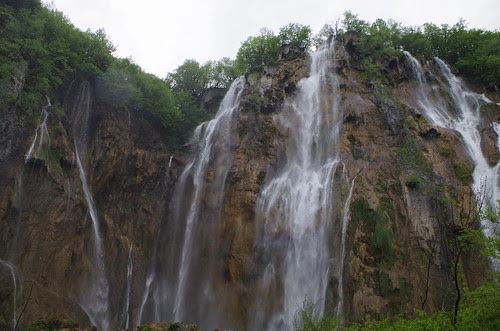 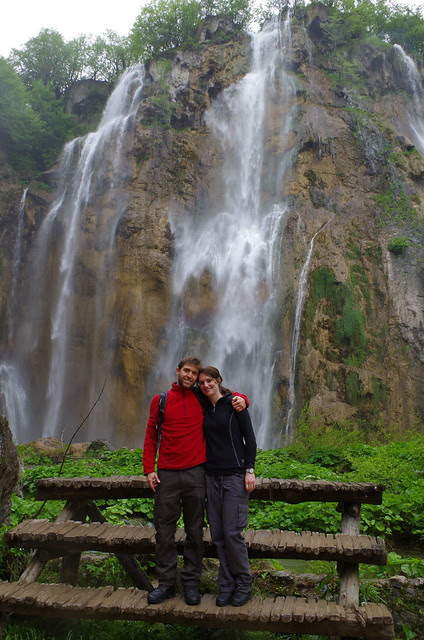 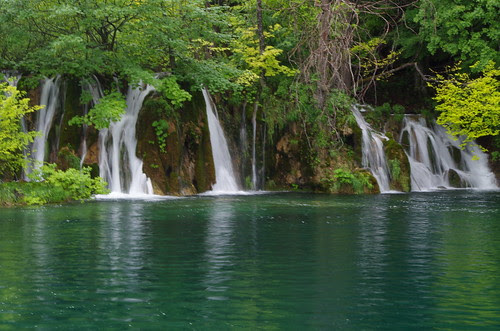 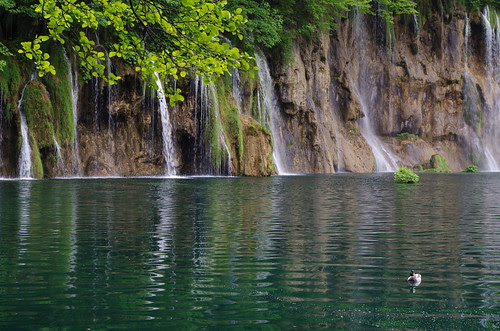 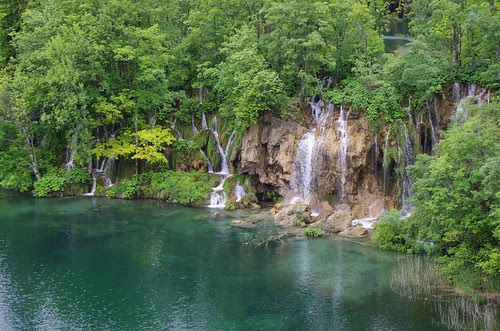 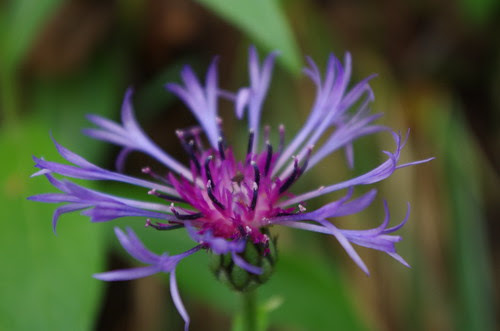 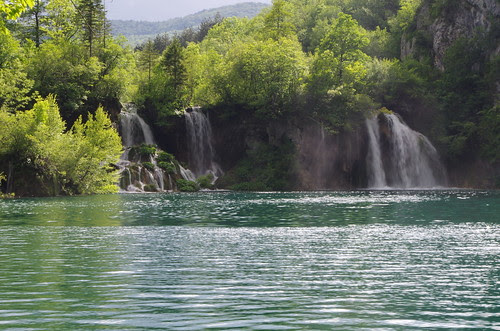 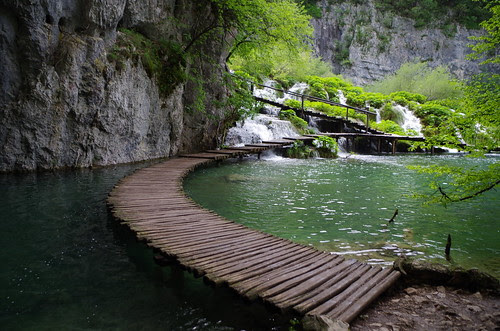 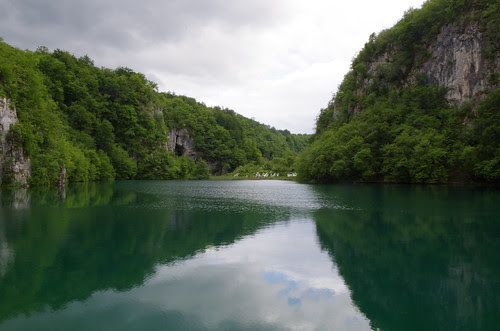 All day we walked rather than taking the connecting buses and tired ourselves out and earned ourselves another big meal. We crashed out pretty early and were up at 7.30am the next day and left around 9.15 after breakfast. We crossed the border near Bihac (Bosnia and Herzegovina). This time there was a more sudden change in scenery (definitely less affluent than Croatia) and more obvious bullet ridden and shell damaged buildings. The driving and the roads also got significantly worse. I guess rebuilding a country isn't easy once it gets torn up. On this day we were heading to Sarajevo. We both wanted to go and see the city that was under siege for 3 years and endured a lot of fighting. This partially felt like something we needed to do as it happened quite recently and was on our doorstep which we consider important to us.

Bosnia is one of the most beautiful places we have ever seen, although the contrast of lush mountains and still bullet scarred buildings was very thought provoking (we've not got many pictures of this sort of thing, as seemed pretty insensitive to go up and start snapping). There were still a lot of bombed out shells of buildings visible all along the road, and there is definitely no disappearing off into the bushes for a pee, as there are still 200,000 land mines to be found. 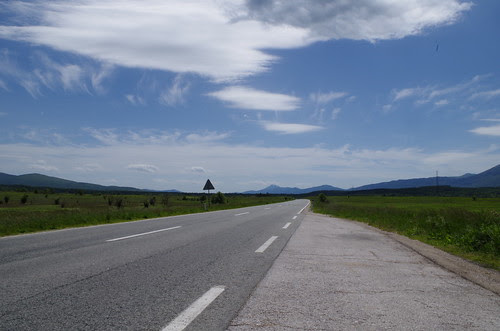 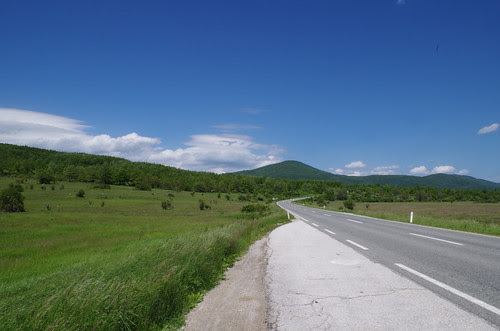 The roads to Sarajevo were slow and busy with lorries, cars, tractors and bad drivers. We got in to Sarajevo around 5pm rush hour and it was a bit crazy, but I knew what to expect and it was fine in the end (it was a bit like being back in Turkey.. or the south of France.. or Southern Italy.. that type of fishbowl style road use). After a couple of laps of the old town and asking about 5 people we eventually found our guesthouse. It was located pretty centrally near Bascarsija (means Main Bazaar). Also the Sat-nav only had about 10 streets in its memory, which was of no help. 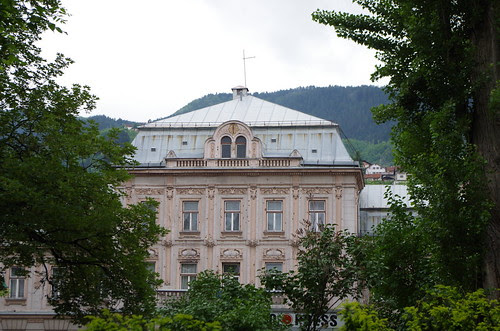 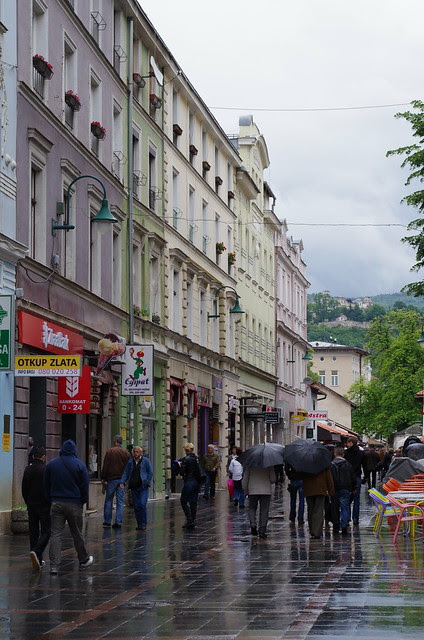 We went out for food in the evening, and took in the atmosphere of the place at night. (Side Note: Second day of the trip with no rain and no getting soaked) The next day we had a lazy start, went and got some breakfast (borek) and wandered the warren of Bascarsija. After a while we were ready for the emotional stop we had preplanned at the Galerija 11/07/95 (http://galerija110795.ba/), which is a photo and video display of the atrocities that happened in Srebrenica and it's localities between 1993-1995. We spent around 2-2.5 hours in Galerija 11/07/95 watching videos (stories of survivors, can also be found http://cinemaforpeace.ba/en/testimonies) and looking at some very moving photos. Today people are still burying their loved ones...

The fact that this happened this near in time and this close to home is very worrying. To me it also feels like a lot has been swept under the carpet and a lot of politicians and people in UN at the time have a lot to answer for (personal opinion). 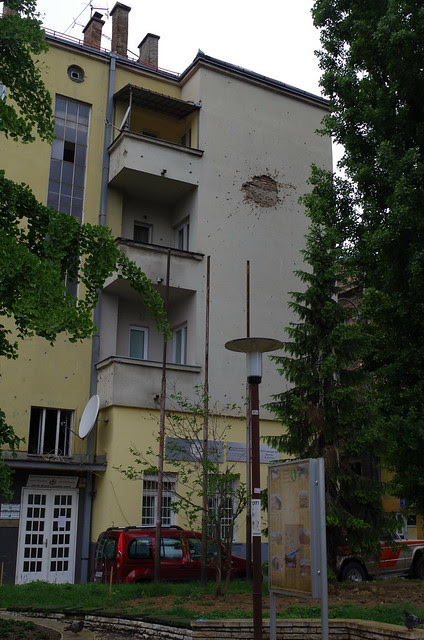 After this we went to Franz and Sophies tea shop on Petrakijina 6 and had wonderful pots of tea served enthusiastically by the owner (who seemed as enthusiastic about life as he was about his teas, very nice and very warm fellow... a bit like his teas). I had an amazing Assam and Charli had the home fruit brew, which was really amazing. We munched on some nice cookies and some fresh cherries all on the house.  Following a break back at the guesthouse, we wandered back in to town as the sun decided come out (ow did I say it rained again today and we got wet yet again.. no joke..) and we thought we should snap a few shots while things looked crisp. 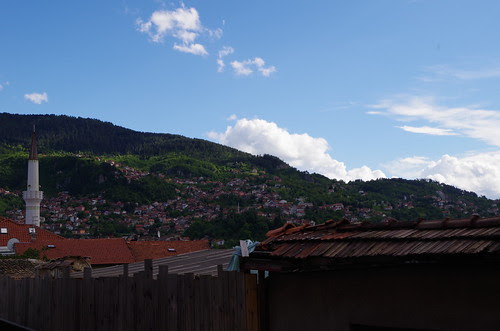 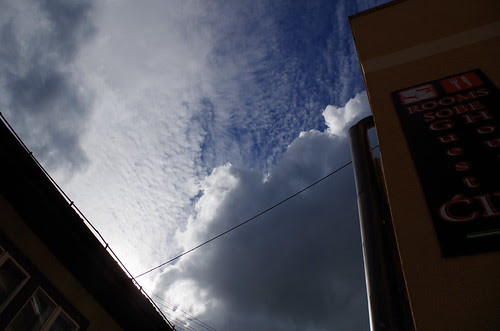 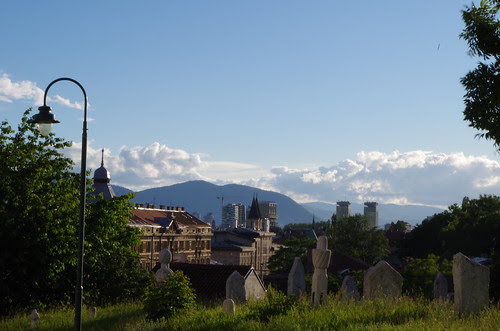 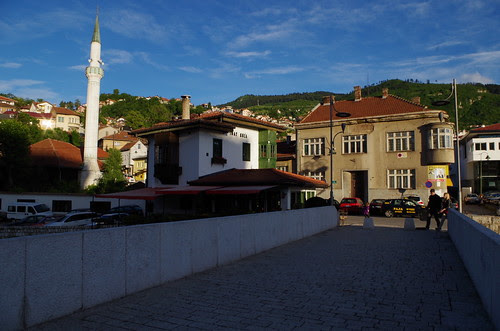 This is the bridge where emperor Franz Ferdinand got assassinated excusing the triggering off of the 1st World War. 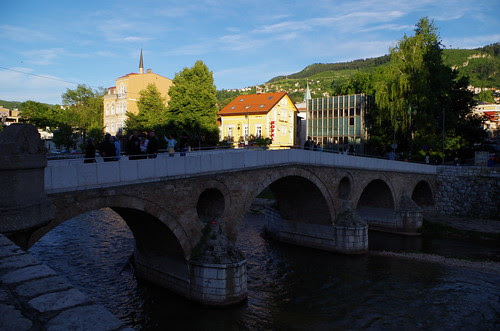 Sarajevo is just beautiful and we both fell a little in love with it, and would love return one day. I think I like it more than Ljubljana.. it definitely has a real vibe. Bascarsija seems like it's never lost its place in the city and become a touristy area, I mean it is touristy but is very much used by the locals as a main eating/drinking/meeting/greeting area.. it is ace. Also like Ljubljana it is a zero hassle place, nobody tried to sell us anything or make us come in to their restaurant etc etc (none of the usual rubbish you get). However this region is politically still very confused/divided and we both hope there is more peace for these people in the future.

As the weather was looking pants again (stormy on the Med coast) we decided to head to another B&B just outside Dubrovnik (much cheaper) via Mostar. Not having the weather to camp is really annoying me but it is making the trip what it is... so I shalst stop whinging about it... just for this post.

Today we set of around 9.15am, realised the sidestand was loose and sorted that out once we were out of central Sarajevo. In some small town I filtered passed the traffic and got going as usual once the light turned green, only to be pulled over by a very very Bosnian police officer... after 10 minutes of pleading and saying “In England.. this is filter! Motorbike can filter! It's OK... I didn't know I'm sorry” . Just as he started writing the ticket he must have heard me say “I'm sorry”  for the 30th time so he just gave me my passport back and told me to go. PHEW! (Would have been a 50Euro fine to pay in at a bank or a post office). Also the policeman laughed at my name (Oliver Kaan), which may have helped us get off! We arrived in Mostar just before lunch time, paid the equivalent of £2 to a complete stranger for parking our bike on a public street (as you do) and headed around the twisty old streets and to the Stari Most. 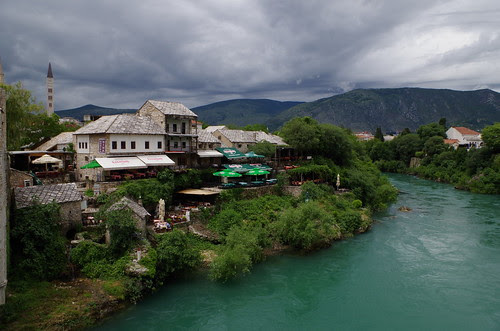 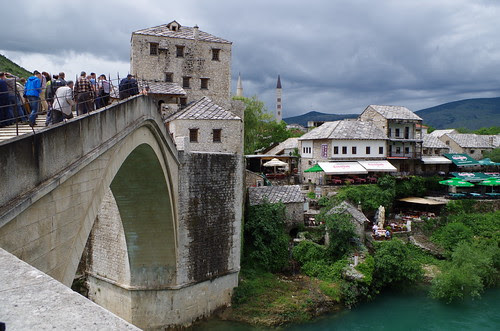 Mostar is very pretty but it is very very touristy and people try and sell you things. After the relaxed non pushy attitude of Sarajevo it was very surprising. We had lunch overlooking the river and with the bridge in view. (As we were doing all this it was hammering it down with rain). Once re-fuelled we set off towards Dubrovnik, and after half an hour or so the rain gave up and we reached the Adriatic coast in glorious sunshine and dry roads. 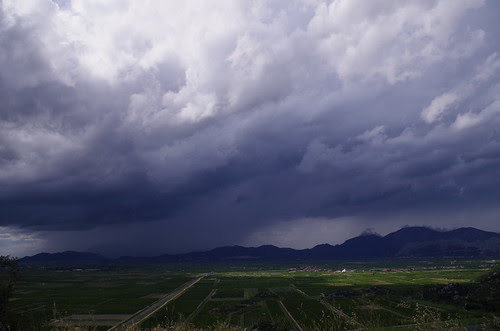 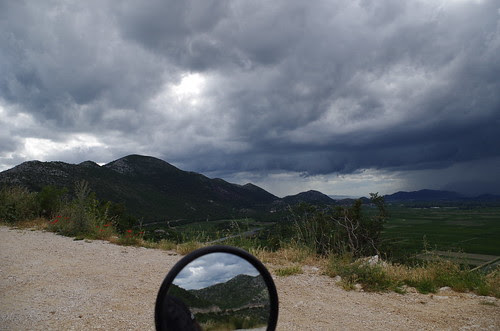 Around 30km from our destinations we both needed a break and stopped on one of the many scenic spots on the road. Around 50 yards down the road there were a couple of bikers looking in trouble. I went over to ask what was wrong and the bike kept cutting out once it was in gear. Immediate thoughts were side stand switch, as the guy kept saying the magnet was lost (I think it was a hall-effect sensor). I gave them a hand shorting the switch but the bike still wouldn't start, we had no multimeter, no wiring diagrams so it was a bit of a hard one. Ow did I say the bike broken down was a KTM.. the wiring on those things is dismal and very exposed. After a while, we cut out a small magnet out of Charli's bag (Primark, £5 so no worries) and it was still not having it, so the problem may have been something else. After a while longer we needed to head off, the guy tried to give us 20Euros but we refused it. I felt quite bad leaving them there but there wasn't much I could do without a diagram and a meter and I don't know the bike very well. As this was happening the rains were slowly catching up with us. 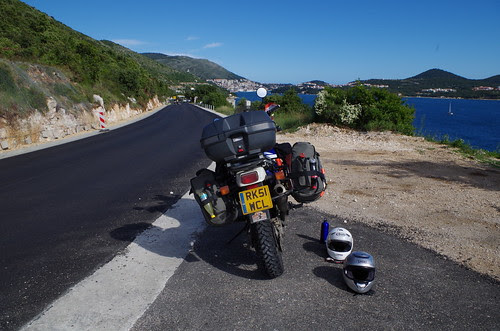 We arrived at our B&B and after a quick wash went down to get an evening meal. We had warned them about Charli being a veggie so the owner had prepared us an amazing olive-oily vegetable feast, straight out of the garden, served with a massive jug of house wine and finished off with fresh garden strawberries. Towards the end of the meal another couple walked in and asked for a soft drink, the guy replied with “Ooo.. sorry I only have wine” … amazing... (then they managed to get hold of some juice). The rooms are pretty basic but we would recommend this place for the food! (B&B Country House , Zvekovica 60, 20210 Cavtat ). Tomorrow we are aiming for Albania or maybe stay over in Montenegro or stay here and see Dubrovnik.. who knows really.. :D
by Charli and Oli (Kaan) at 09:04