Escaping the Dolomites, and loving Slovenia!

We woke on Friday morning nice and early ready to hit the road, but were somewhat alarmed when we looked out of the window to see this: The snow was still coming down fairly hard, and we were pretty worried about safely making it out of the mountains. We briefly considered waiting it out in Cortina for another day, but it is a bloody expensive town, and a quick check of the forecast showed that the weather was due to get even worse over the next couple of days, so it was now or never. Snow is pretty much the worst weather you can ride in, and we were both having nightmares that the roads would be similar to yesterday in terms of difficulty, which would have been borderline suicidal in the ice. Our worries were not helped by the fact that the lady on the reception desk kept telling us we were brave!

The snow was still coming down hard when we got onto the bike, but luckily the road had stayed pretty clear, so it was just like riding in the rain (except for the fact that the snow kept collecting on our visors... not a problem for me, but not ideal for the driver!). The road out of Cortina was all downhill, which was encouraging as the last thing we wanted to do was go higher. Sadly, it wasn't practical or safe to stop and take any pictures, but what we could see of the mountains through the clouds was beautiful. I have to say though, the Christmas type scene of snowy pine trees was a little bizarre seeing as it was mid May!

The aim for the day was to get to Ljubljana, and we called and booked our hostel as soon as we had successfully gotten off the mountain and on to non-snowy low ground. The road through the edge of the mountains was incredibly scenic, and we even managed to get a photo from the side of the road. Although with the snow we had had our fill of the Dolomites, it still felt sad to leave the mountains behind. Originally we had planned to ride to Slovenia via the mountain passes, but the snow ruled this out. Things deteriorated from there, and the weather took a turn for the worse. What should have been a lovely drive along the Mediterranean turned into a long motorway slog, where we got buffeted about by winds like bugs in a storm, whilst getting pelted with rain and lorry spray. There was nothing to do but grit our teeth and get on with it. We stopped at a services near the border to try and warm up. It was honestly the crappest services we have ever been to (including basic petrol stations on the side of the road), and was mainly comprised of a shop selling random tacky crap, with absolutely nowhere to sit.

The weather started to cheer up almost as soon as we crossed the border into Slovenia, and we decided to take the smaller roads, rather than getting to Ljubljana on the motorway. It is so hard to describe how beautiful Slovenia is; almost immediately we were driving through small villages and vineyards, with green mountains as far as we could see. At one point, the road was incredibly narrow, and followed a series of hair pin bends edged with walls on both sides, which meant they were almost totally blind corners. As we were coming into a bend, a coach came round at the same time. The road was so narrow that the coach took up pretty much all of the road. Oli tried to get the bike over enough to avoid it, but the coach driver was still moving and clipped us, toppling the bike. It all happened so fast, and Oli and I both sprung up very quickly in shock. Luckily nobody was hurt, and the bus driver got out to help us pick up the bike and check we were OK. On reflection, we are both really pleased we chose soft panniers rather than metal ones, as it was a nice soft landing for the bike and no damage done! Oli has drawn a helpful diagram below for those of you who are struggling to imagine this: 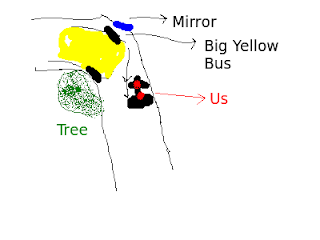 We were both feeling fine after the accident, and set off with confidence not too dented. The roads were still slick from the earlier rain, and as we were taking a wide bend, the back wheel gave and lost traction. Oli handled it brilliantly and we stayed upright and almost on the correct side of the road. For me, it was a lot more scary than the bus incident! We proceeded with caution, as in places the wet tarmac was very slippy, and the road was very narrow and bendy (although still very beautiful!). Both very tired, we decided to rejoin the motorway and just get to Ljubljana.

We arrived in the city early evening, to find up the hostel had made a mistake with our booking, and the private room we had booked was not actually available that evening (to be fair, they had tried to call us several times to let us know). After such a hard day with all our gear soaked, this was not the news we wanted to hear! We agreed to sleep in the dorms for the night (thankfully we were sharing with two lovely girls, and not the Italian stag party or the Slovenian leather waistcoated biker club...), and moved into our actual room the next day.
A few people had raved to us about how great Ljubljana is, and after a few days here I completely agree. On Saturday, the first thing we stumbled across was the food market in the centre. We had a great time wandering around, and bought a load of veg, fresh cherries, strawberries, and smoked meat for Oli at bargain prices. We spent the rest of the day wandering around the town and visiting the castle, before going out for some lovely Slovenian wine in the evening. Today, we were lucky enough to have a beautiful sunny morning, and went for a stroll around Trivoli park. We are both going to be sad to leave Slovenia tomorrow. Ljubljana is such a lovely tranquil and calm city considering it is the capital and their largest city. Our hostel has also been brilliant, and we would wholeheartedly recommend it for the lovely staff (http://tinyurl.com/nclbg67). It's probably a good thing we are leaving really, as we have been going to town on the delicious cheese boreks from the bakery next door. Tomorrow we are off to Croatia!

P.S. Today we stumbled across these vintage tractors gathered in one of the squares. Oli got excited and took a lot of photos, and I let him pick two for the blog.